Regulars to our stand at Fairs and Shows around the country have probably heard me talk about my framing of eight pieces of the ‘Dambusters’ and the signed print by Robert Taylor. Well it is finally time for us to part with this unique piece of history. Framed behind ‘Tru Vue’ Conservation Clear glass each piece of aircraft is individually certified to be genuine and as described.

If you are interested in acquiring this fabulous piece of WWII history please get in touch with us via the website or directly at howardmachin@hotmail.co.uk. The price and detailed photographs of the aircraft pieces and signatures are available on request.

On the night of 16th May 1943 nineteen specially adapted Avro Lancasters took off from RAF Scampton in three waves. Led by Wing Commander Guy Gibson, the targets were the key dams supplying power to the heavy industry in the Ruhr.

Of the 19 aircraft that took off only 11 returned to base after their successful mission. Of the eight aircraft that did not return seven have been found and excavated. This historic picture contains an individually certified piece from each of those seven aircraft. It also contains a piece of  O ‘Orange’, which did return from the raid but was subsequently shot down whilst on a SEO arms drop for the French Resistance on 11th December 1943.

All eight pieces of Dambuster have been acquired by Ancient Wonders from respected aviation archaeologists and the companies that they manage.

The relic pieces are as follows:

The centre piece of this picture is a print by Robert Taylor, titled ‘The Dambusters’ and depicts the number three aircraft, P ‘Popsie, flown by Flight Lieutenant Mick Martin, on its’ run at the Moehne Dam. Guy Gibson’s aircraft is shown flying ahead of Martin’s in an attempt to distract the flak gunners.

The signatures are as follows:

Whilst sorting out the workshop during lockdown I rediscovered a box of ‘partial’ fossil fish. These pieces have all been professionally prepared and are totally natural. There are a variety of species but all the fish are all from the Green River Formation, Wyoming, USA and date from around 50 million years ago.

Each piece of limestone contains part of a fossil fish and I have framed them in groups as a ‘montage’. By their very nature each framed montage is unique and will be available in very limited quantity, probably only five or six frames in total.

Beautifully framed Madagascan ammonites presented in a diamond shaped opening rather than square, makes them stand out more than ever. Launched shortly before ‘lockdown’, examples of these eye catching pictures will be on our stand at this years’ shows.

This stunning museum grade crinoid slab has come from the Hunsrück Slate Mine, Bundenbach, Germany. The fine detail and Pyrite highlights create a fabulous assemblage of four different species of Early Devonian Crinoid.

Preparation of this fossil specimen was carried out by specialists using x-ray examination followed by micro abrasion to reveal the fine featherlike detail and Pyrite highlights.

Provenance for this piece is supplied by its’ sale at Sotherby’s, Paris, Histoire Naturelle, in October 2012

This fabulous specimen has now been framed by Ancient Wonders. 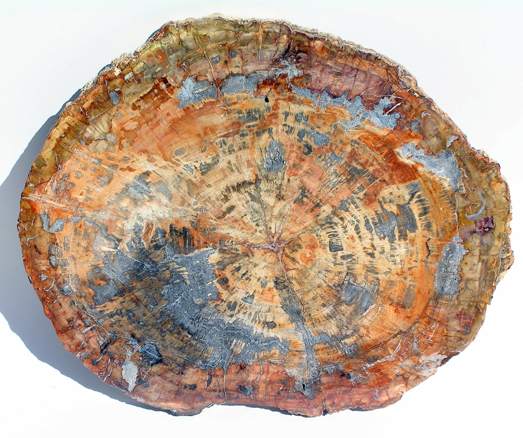 Just arrive from Madagascar this slice of fossil wood, from the ‘Araucaria’ or Monkey puzzle tree, is truly fantastic. Cut and polished on both sides to reveal the warm reds and golds. The preservation is so good that you can almost count the growth rings. Weighing in at over 11kg and 55cm across at its widest point this is a simply massive piece of 250 million year old fossil wood from the North West coast of Madagascar. 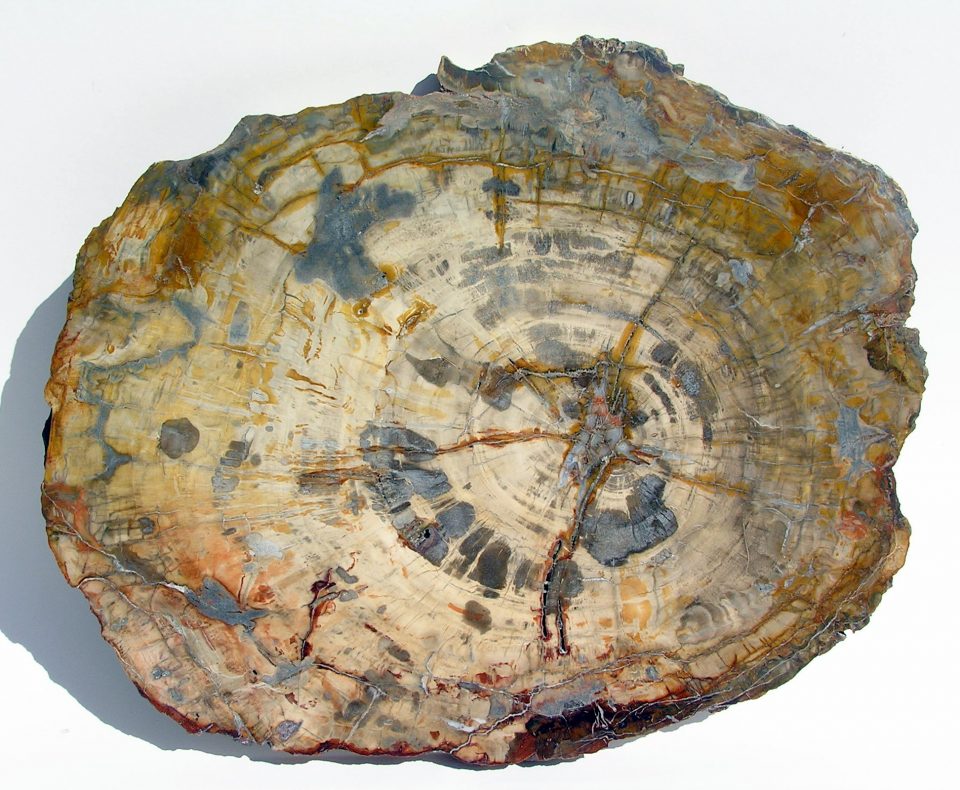 Just arrive from Madagascar this slice of fossil wood, from the ‘Araucaria’ or Monkey puzzle tree, is truly fantastic. Cut and polished on both sides to reveal the warm creams and golds. The preservation is so good that you can almost count the growth rings. The hole in the centre has, very unusually, been replaced by a stunning banded agate. Weighing in at over 10kg and 54cm across at its widest point this is a very impressive piece of 250 million-year-old fossil wood from the North West coast of Madagascar. 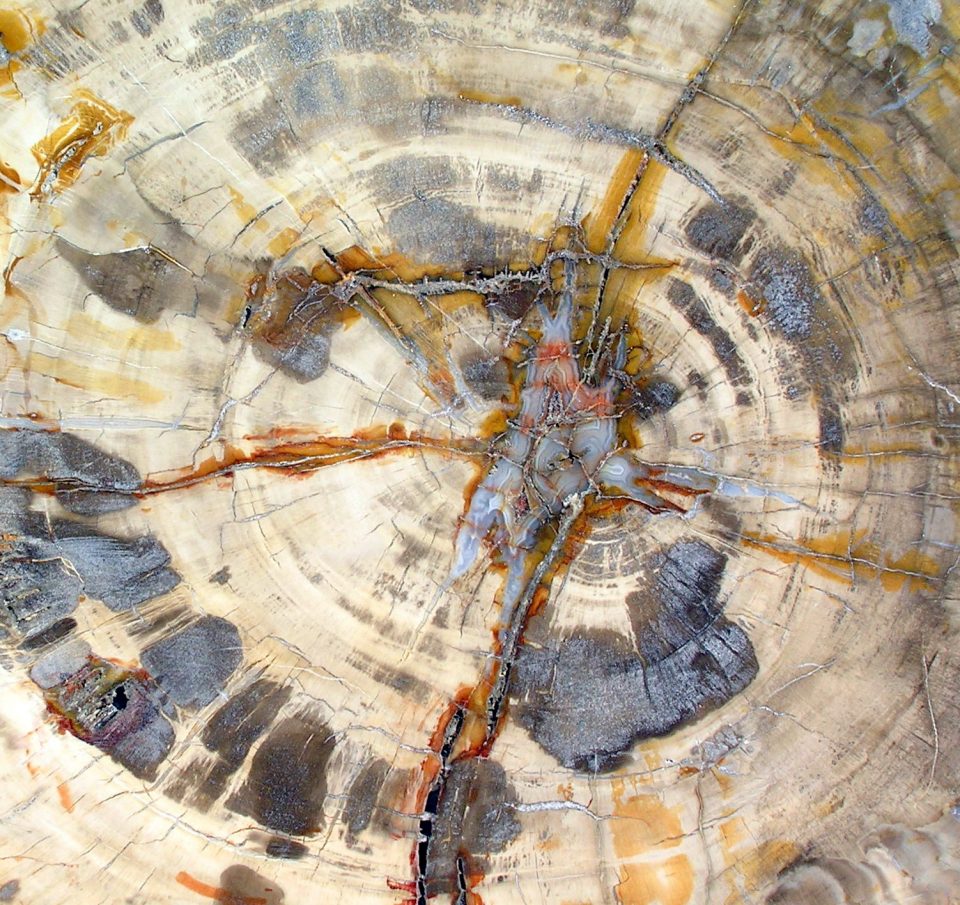 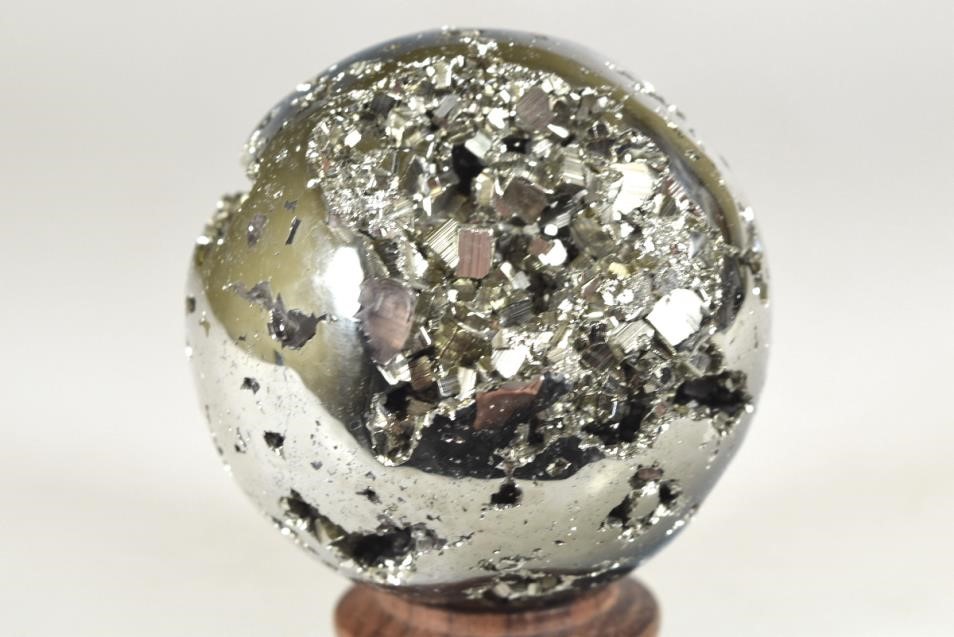 We have manage to purchase a small quantity of very high grade mirror like Iron Pyrite from the Huaron region of Peru. The exquisite crystals twinkle and glisten making it very tactile and a gorgeous addition to anyone’s collection. We have a small number of handpicked, hearts, spheres and eggs available and they will sell out very quickly. If you would like to see examples from our range contact us and we will either send pictures or bring them to a show near you.

Just acquired from an old French Collection are a small range of these beautiful and very rare, 250 Million Year old, Triassic Fish Nodules from Madagascar. Framed either as singles or as pairs they are striking and an amazing present for the “Fisherman” in your family. 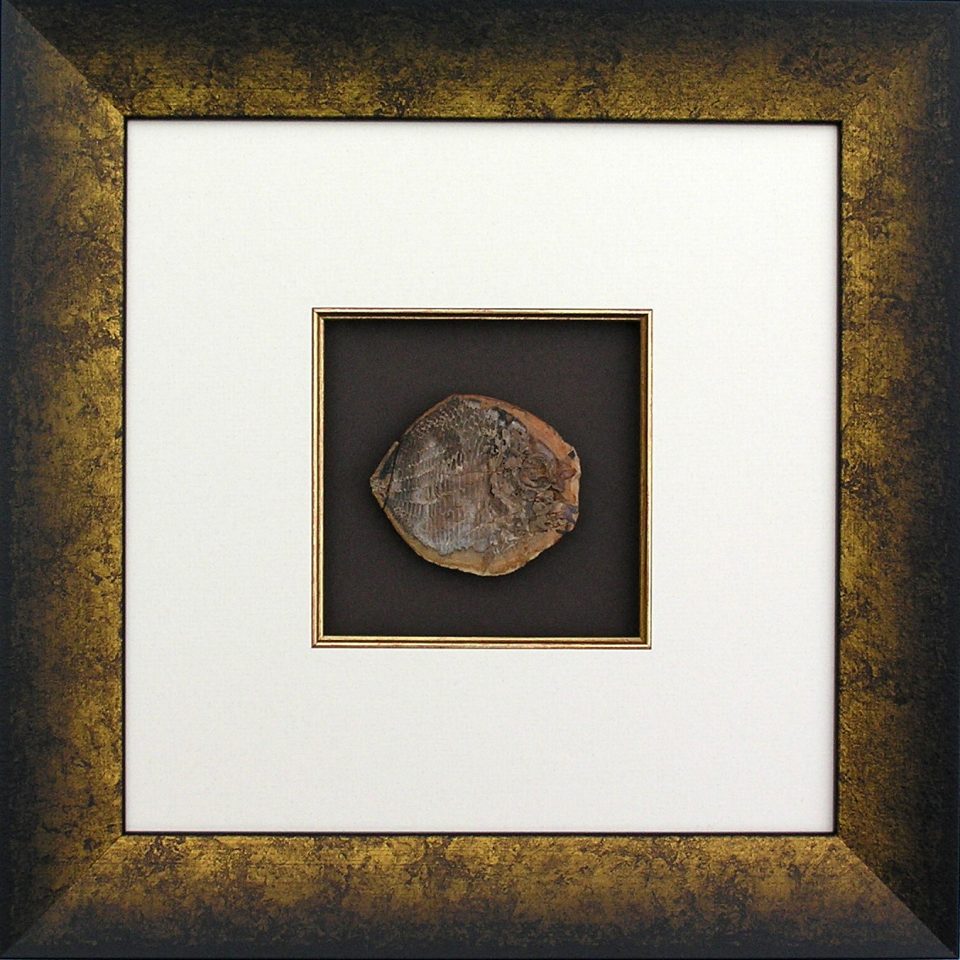 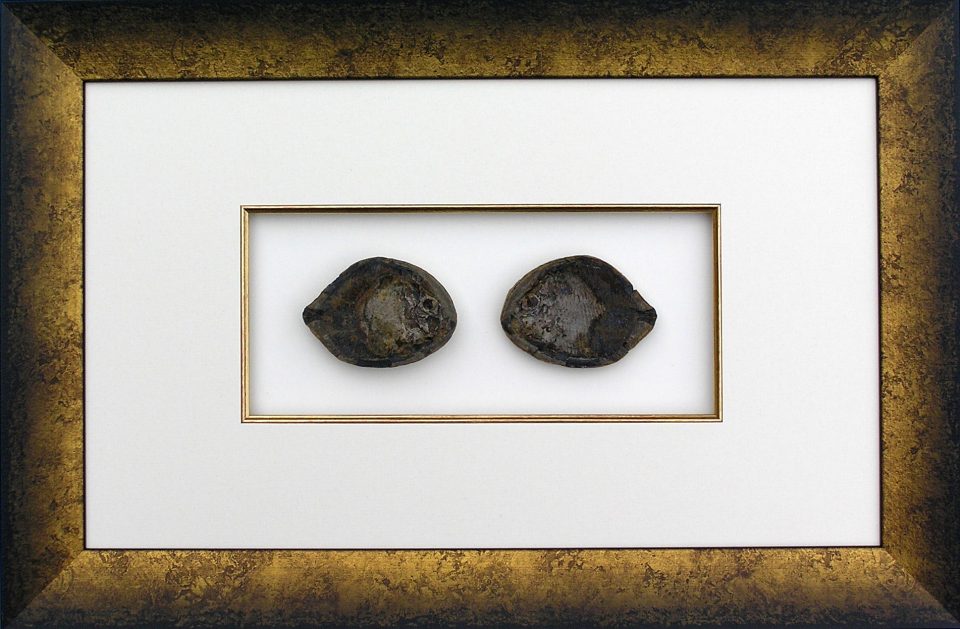 We have managed to acquire a few gorgeous jewellery grade examples of Chrysocolla from Peru. We have less than a dozen pieces in total, a couple of spheres, three hearts and a few eggs. (We only picked the very finest gem quality examples)
If you collect hearts, spheres or eggs this is a must have. If you are interested contact us as the few examples we have will disappear very quickly. 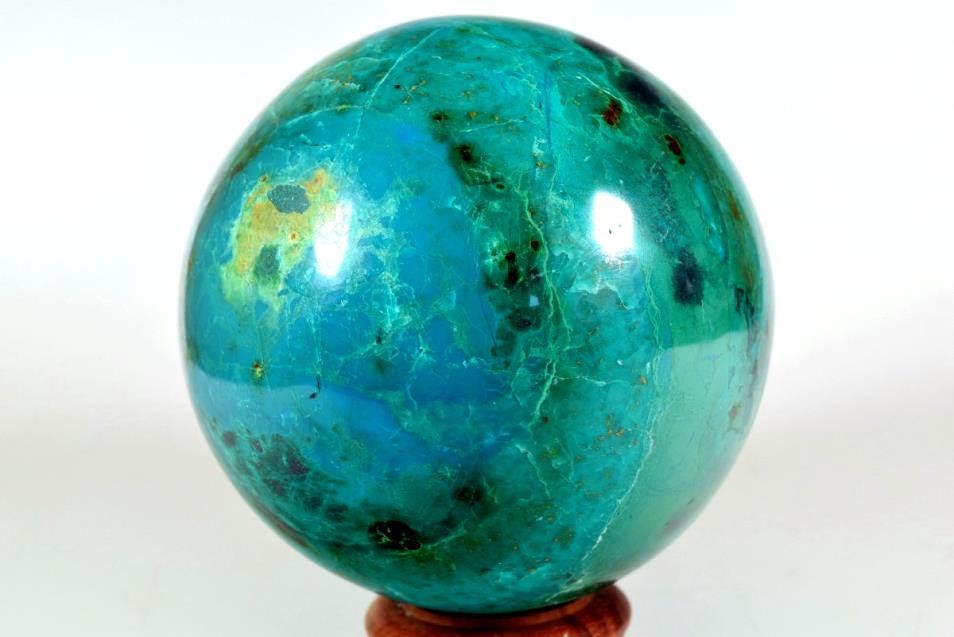 Peru is an excellent source for Chrysocolla and there is a well-known mine called the Lily mine which is about 200 kilometers south of Lima. This mine produces a small quantity of beautiful quality Chrysocolla which is absolutely sky blue and stunning. The chrysocolla we have is of a very high quality and has a wonderful polish and has not needed to be stabilized at all. It has formed with some green Malachite and some black and almost metallic Tenorite. The mix of these colours makes for a very pleasing display piece of quality material. Chrysocolla is a hydrated copper and is one of the more challenging stones to polish. Top quality Chrysocolla is in very limited supply and is likely to disappear fast.

To celebrate the 100th anniversary of the formation of the RAF we have available framed relics from an original Airco DH-9 bomber. This aircraft saw action at the end of the First World War flying over the Western Front. The pieces that we have are from the main wing spar of the original that has recently been restored by Hawkinge Museum. 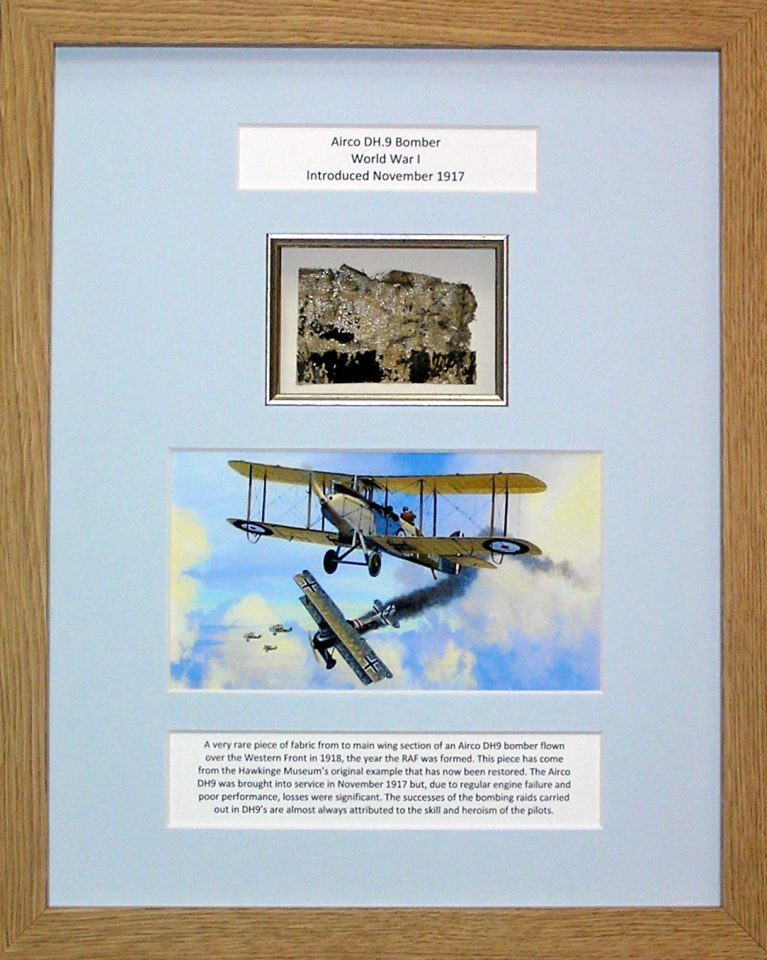